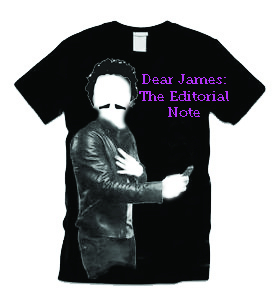 The media loves open letters so I should make it clear that this is to you and to the universal yous, that is, all the Jameses reading this. It’s an editorial note cloaked in an open letter. I’m not being sneaky! Just embracing the unusual side effect of this project.

The name James Franco is a kind of patron, the society’s new version that has nothing to do with financially supporting artists. Our new kind of patron opens doors. How strange for a person’s name to be so feral that it could open doors to a conversation about the industry’s limitations on literature in addition to the limited opportunities for new writers in the literary world. Your kudzu name just breaks its way through the windows—I use that term affectionately. Nothing is better than kudzu, which, if you drive along the highway on the east coast you’ll see, covers one thing to reveal another.

The James Franco Review went viral—and before that happened I actually had a pretty misinformed idea of what it meant for something to go viral. It was as exciting as it was frightening. Exciting because an idea about the literary world’s cultural blind spots that I thought would be unpopular got heard by major outlets (LA Times, The Stranger), frightening as I watched the force of the message get thinned by the idea of celebrity as secondary outlets either covered it by recycling information they barely read in other articles or by twisting the mission to be a snarky criticism of your work.

The only thing in this statement that’s true is the title of the journal, The James Franco Review.

But James, you know how all that goes.

The creation of The James Franco Review has proved a point about visibility way better than I expected it too. How often does a literary journal get a write up in Entertainment Weekly? Especially a journal that is exploring ways to make visible underrepresented or misrepresented writers and narratives, especially a journal that was seeking a way to remake the journal publishing process.

As a writer who is literary, as a writer who is queer and watches narratives with queer characters and far more often, narratives with characters of color go unpublished or watching these authors confront the pressure to publish by presenting only certain kinds of stories, I wonder where these so-called tastes and desires to not want more come from? In a recent exchange with an editor at another journal, about my own writing, I was told that the elements of a sex scene that indicated it was queer sex were distracting. Though he came to understand the intent and retracted his statement I wondered where he got this idea? And for the first editors of The James Franco Review, who were asked to read dangerously, and to choose work specific to one’s own tastes—what did that even mean?

Issue 1 poetry editor Rochelle Hurt put it eloquently: “At some point, I had to remind myself that my tastes, much like everything else, are culturally formed. This meant that I had to maintain a heightened awareness of cultural difference and bias when reading, asking myself questions like: “is your occasional affinity for subtlety a white, middle-class value?”

Erin Sroka noticed a bias in her reading that “privileged writers with a high level of sensitivity” that matched her own.

And to reading blind, what about that?

Nonfiction editor, Nancy Kim wrote “It puts the editor in a vulnerable place, because you don’t really know whom you’re dealing with, and you’re working off the story without a fixed context.” Rochelle Hurt referred to it as a method of meta-editing and all agreed that blind reading should be actively utilized in journals.

Editors who have not been put in the stressful, rapid two month process of choosing work solely on their own tastes, have likely not been asked to question where these tastes came from, or how they are conditioned to read and the way that might limit the market. As readers, James, I think we should consider what it means to be culturally formed to desire certain things, and to start desiring differently from the industry and for ourselves. These sentiments I’m expressing aren’t new, in fact, if we could all just heed Junot Diaz’s article “MFA vs. POC” and Sarah Schulman’s book Ties that Bind we could be halfway to a literary utopia already.

Issue 1 of The James Franco Review rose out of this turmoil, and reveals our continual sense of longing. “We always want the shine to enter our body,” writes poet Chelsey Weber-Smith, while Kamden Hilliard states “I am at own risk.” From donating eggs to a couple in England in Katie O’Reilly’s essay, to being the brown traveler on a red eye in Ahsan Butt’s short story the prose published explores what we risk to connect and who we become in the process.

“I’m sorry, I didn’t want this either” laments Yasmin Belkhyr in her Ars Poetica and yet we are still here together, like poet Kate Lebo in her poem “Ladies, this is the Final Rose” taking what wasn’t planted for us.

Perhaps this project is training a new kind of editor, and maybe, if you’re willing to read dangerously, a new kind of reader. Where did you get your tastes? The second series of editors are half way through their tenure, and the third set is gearing up. I look forward to seeing where we are by this time next year: between writers, editors, and readers, we’ll have quite a force.